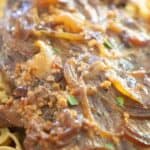 I used to avoid cooking London Broil. It's a very lean cut of meat which means it is easy to dry it out while cooking. Enter the Crock Pot. Once I experimented with how to cook it in a slow cooker, I was hooked. With just 5 minutes of prep time and a full day cooking, you can have fork-tender meat without worrying about drying it out!

What Cut of Meat is London Broil?

Originally London broil was made with flank steak, but over the years, the name has been applied to many other lean, thick cuts of beef, such as top round. Generally, you will find London broil being marketed as anything from a 1-inch steak to a 4-inch roast that comes from the sirloin or round sections of beef. These cuts all have something in common: They are lean and tend to be tougher.

Although the label may not direct the consumer how to cook the piece of meat, a London broil is meant to be marinated and cooked over high heat. It's a great way to get a really good meal out of a less expensive cut of meat.

My favorite way to serve this recipe is to thicken the drippings left in the slow cooker and serve it over egg noodles...it's reminiscent of stroganoff without the mushrooms!

You could also serve this with Classic Crispy Roasted Potatoes, mashed potatoes, or rice!

If you try this recipe, please comment or rate it below, I love hearing from you!

« OREO Poke Cake
How to Grill Corn in Foil »