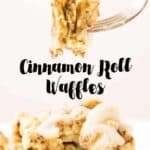 Cinnamon Roll Waffles are a fun take on traditional premade cinnamon rolls. In just a few minutes with your waffle maker, you can have these sweet cinnamon sugar waffles topped with cream cheese frosting!

I know, I know...I can hardly call this a "recipe!" I mean, it's really more of a revolution. All the cinnamon maple goodness of cinnamon rolls in amazing waffle form, in just minutes using premade dough and a waffle maker. It's genius!

How to Make Cinnamon Roll Waffles

What you need to make these delicious cinnamon bun waffles:  refrigerated cinnamon rolls (with frosting), waffle maker.  The end.

Separate the cinnamon rolls and place them in your pre-heated waffle maker.  Waffle according to your maker's instructions ... mine literally took about 2 - 3 minutes.  Watch them closely so they don't burn - they cook quickly!  Why would I ever preheat my oven and bake them for 20 minutes again?!  This is GENIUS!!

After baking the cinnamon bun waffles, drizzle with the included frosting. If the frosting is too thick, microwave it in a bowl for 10 seconds until it thins.

These are best served warm right after the above mentioned drizzling!
Ya'll, life is short.  Breakfast doesn't have to be complicated.  Make cinnamon roll waffles!

If you try this recipe, please comment and rate it below, I love hearing from you!

Cinnamon Roll Waffles are a fun take on traditional premade cinnamon rolls. In just a few minutes with your waffle maker, you can have these sweet cinnamon sugar waffles topped with cream cheese frosting!

This recipe was originally published in May of 2012 and updated with new photos and additional information August 2019.