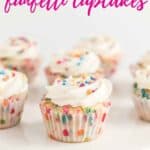 Homemade Funfetti Cupcakes are easy to make and taste better than anything from a box. These light & fluffy cupcakes are topped with a decadent buttercream icing and sprinkles, of course!

I love shortcut recipes that use store-bought mixes, like my super easy Funfetti Cookie Bars or Funfetti Cake Mix Cookies, but every now and then it’s fun to make something from scratch. Especially when it’s easy and turns out as amazing as these light, moist, and fluffy Funfetti Cupcakes!

Why I love this recipe

I’ve tried a LOT of homemade funfetti recipes in the past but none of them were great. The sprinkle colors would bleed into the batter or all the sprinkles sank to the bottom. It’s not as simple as just throwing sprinkles into regular ol’ cake batter.

Whipped up egg whites are folded into the cupcake batter and they give the batter a little more substance, allowing it to hold up the sprinkles!

Start by mixing your dry ingredients and set aside, then cream together butter, sugar, oil and vanilla. You’ll see a visible lightening of the mixture after a few minutes, that’s when you know its ready to move on!

Once they are blended you’ll add half of the flour and milk, then mix and add the remainder. This helps the batter blend up evenly.

Now it’s egg white time! This is the secret ingredient that makes these the best funfetti cupcakes I’ve ever tried! Whip the egg whites until they are nice and stiff, they’ll form peaks like in the photo below.

Now we get to bake! Fill the cupcake liner about ¾ full, these rise beautifully.

Bake for 15 minutes then allow to cool before topping with the delicious buttercream icing!

Seriously, are they just amazing? (They taste as good as they look!)

What kind of sprinkles are the best for funfetti cupcakes?

I prefer using jimmies in these cupcakes. They are big enough to see clearly and don’t bleed into the batter like nonpareils.

Can I make this as a cake instead of cupcakes?

Yes! I would double the recipe and lengthen the baking time if you make this in a cake pan.

Can I use cake flour instead of all-purpose flour?

Yes, if you use cake flour increase the flour to 1 ½ cups.

If you like this recipe be sure to also try these orange sherbet cupcakes, birthday cake ice cream cupcakes, and this yummy sugar cookie dough frosting!

If you make this recipe, please comment and rate it below, I love hearing from you!

Homemade Funfetti Cupcakes are easy to make and taste better than anything from a box. These light & fluffy cupcakes are topped with a decadent buttercream icing and sprinkles, of course!