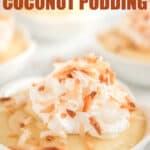 It is easier than you think to make your own homemade Coconut Pudding from scratch! With just a few basic ingredients and less than 20 minutes of cook time, you’ll never go back to store-bought pudding again!

Have you ever made pudding from scratch? It is so much easier than most people think and tastes so good you’ll never go back to store-bought! This recipe for Homemade Coconut Pudding is one of my favorite simple desserts, I can’t wait for you to try it!

See? Nothing crazy in that ingredient list, so why not try it out?

How to Make Coconut Pudding from Scratch

This recipe is very simple and fast.

Simply bring the milk, sugar, cornstarch, and eggs to a boil on the stovetop, whisking until it is thick and bubbly. Then remove from heat and stir in the remaining ingredients.

Cover the pudding with plastic wrap (to prevent a film from forming on the top) and refrigerate at least one hour before serving. Too easy, right?

I hope you enjoy this recipe as much as we do, please comment and rate it below if you give it a try, I love hearing from you!

It is easier than you think to make your own homemade Coconut Pudding from scratch! With just a few basic ingredients and less than 30 minutes, you’ll never go back to store-bought pudding again!